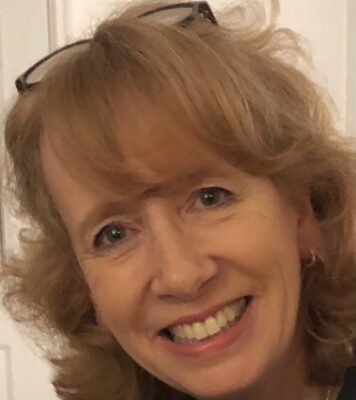 Julie Izad has been running the Coast Academy of Dance since 2001. She is a qualified dance instructor in the ISTD & IDTA syllabi and holds four Associate teaching certificates.
Prior to moving to Sechelt in 2000, Julie enjoyed twenty-five years of working in show business. She was a professional dancer, choreographer, actress, and model working in the UK, France, Italy, Japan, China & Monte-Carlo.
Julie has enjoyed teaching students of all ages at CAD but has now taken a step back to allow the amazing talent that is in “The CAD Faculty” to continue to evolve and take the studio to the next level. Many of our teachers are CAD alumni which is a testament to the studio’s Pre-Professional Program that has been in place since 2006. Julie is particularly proud to have been able to witness all of the joy and positive influence that dance has brought to our community.

Christina Darwin trained at the Coast Academy of Dance, on the Sunshine Coast Peninsula, where she studied ISTD Modern, Tap, Ballet and Jazz as well as Contemporary and Hip Hop. She participated in the Pre-Professional and Competition Programs within the school. She graduated with her Associate in ISTD Tap and moved to Vancouver to join Harbour Dance Centre’s Intensive Training Program. Christina’s subsequent exposure to many choreographers, training opportunities and performances helped her realize her passion is truly for teaching.

Since that time, she has taught at various schools and summer camps throughout the Lower Mainland. She has also achieved her Associate Accreditation and Associate Diploma in ISTD Modern after studying at the ISTD Chichester Summer Schools in London. She continuously educates herself and updates her qualifications in both dance and fitness, most recently pursuing Barre Fitness through the International Ballet Barre Fitness Association, as well as many CPD courses through the ISTD. Christina has been acknowledged by many ISTD examiners for her strong examination results in both ISTD Modern and Tap. Christina enjoys teaching all ages and genres and looks forward to sharing her knowledge and passion for dance. Christina has also explored many administrative roles within the dance and fitness industry and is looking forward to continuing her role of Studio Manager for the Coast Academy.

Ms. Jackson’s performing career began in 1978, at Ottawa Dance Theatre, where she danced for five years, choreographing three pieces for that company. She then danced for five years with Mountain Dance Theatre in Vancouver, creating four pieces of choreography, including a full length story ballet. During her last year with that company, she was co-artistic director. Other short contracts included dancing in the Festival Opera production of “Idomeneo” at the National Arts Centre in Ottawa, and dancing at the Pavilion of Promise for the duration of Expo ‘86: the choreographer appointed her dance captain.

In 1992 Shirley moved to the Sunshine Coast. Her involvement in dance here has been with the Sunshine Coast Dance Society, choreographing for the Celebration of Dance. She will be teaching Ballet and Pointe at the Coast Academy of Dance.

Becky began her dance training in Monte-Carlo where she was born and later transferred to The Coast Academy of Dance in Sechelt when her family moved to Canada in 2000. She graduated in 2012 having passed her ISTD Teaching diploma. She then moved to Vancouver and continued her dance training at Harbour Dance Centre with ITP and the Source Dance Company. She has trained with some of the top choreographers in Vancouver, Edmonton, Calgary, Los Angeles, and London, England. Becky has also been a part of TwoFourSeven Hip Hop Company where she has participated in competitions such as BodyRock, Artist Emerge and the World Championships in San Diego having won their category in Canada to qualify.

Becky has been teaching students of all ages for the past four years and loves passing on her passion for dance whilst continuing to train. She has had the opportunity to choreograph group and solo pieces for competitions where she has been very successful winning with high marks and winning a “most unique choreography award” two years running.

Constantly looking for new and exciting avenues to explore, Becky has added acting to her training and has discovered a huge passion for it. Acting has enabled her to bring new and innovative teaching techniques to her dance classes. Becky is very excited for another new and exciting year at the CAD.

Terra grew up in the Lower Mainland, professionally training in gymnastics and dance, and became a professional cheerleader. Her gymnastics instructors included two Russian coaches, one of whom was an Olympic gymnast.  After graduating from high school Terra undertook the Dance Performance Diploma Program at Grant MacEwan College in Alberta.  She learned an immense amount about dance performance from her dance teachers including Bonnie Jean Anderson, who was a Radio City Rockette as well as her private classes with Lois Smith, O.C.

Terra’s performance experience is extensive, including the International Stage throughout Expo ’86, BC Lions Football Club Dance Team, as well as modeling, radio and television commercials. Terra has taught dance throughout the Lower Mainland and upon moving to the Sunshine Coast has appeared with the Coast Dance Society, Movement Arts Contemporary Dance Company, DSdanse Company, Figure Athletes, and conducted strength and flexibility training for competitive figure skaters. Terra had the amazing opportunity to train off and on the water in Hawaii with a World Champion Tandem Surfer. Terra has earned the highest certification as an acro teacher through Acrobatics Arts and is very excited to be teaching another year of Acrobatics and tumbling classes!

Born and raised in Beijing, China, Helen developed a solid understanding of Hip Hop, Popping, and other Street Dance styles in both choreography and freestyle forms after moving to Canada in 2012.

Helen has also worked extensively within the film and television industry. Working on projects such as Riverdale, Christmas Chronicles II, and Julie and the Phantoms. She has worked with Kinjaz dance crew on the KDA “More” motion capture performance at the 2020 League of Legends World Championship Finals opening ceremony. Additionally, Helen has always supported local artists, performing in music videos such as Missy D FT. Kimmortal “XX”, Brooklyn “Imagine”, and Jon Bryant “Candied Tangerines”.

Always excited to share her knowledge, passion, and experience, Helen hopes to inspire her students in finding their true selves through dance.

Born and raised on the Sunshine Coast, Brontë has danced classical ballet from the age of four. Since joining the Coast Academy of Dance in 2006, she has trained in a variety of dance genres, including classical ballet, pointe, tap, jazz, contemporary, and modern. In 2018, Brontë graduated from the Coast Academy’s three-year Pre-Professional Program, receiving her ISTD Associates in Modern Theatre, as well as Imperial Classical Ballet, and completing her advanced 2 exams in modern, ballet, and tap.

Brontë has been fortunate enough to experience a variety of performing opportunities over the years. Since playing Clara in the inaugural year of Coasting Along Theatre Society’s The Nutcracker, Brontë performed each season in a number of roles, including a snowflake, flower, Chinese, Mirliton, Spanish, Ballerina Doll, Arabian Lead and the Dew Drop Fairy. In 2019, she took on the role of Ballet Mistress, and had the opportunity to choreograph for several roles in The Nutcracker. She has danced for many years in the Festival of the Performing Arts and has performed with Coast Academy’s Pre-Professionals in the Source Dance Company’s preview performances in Sechelt. Brontë has competed in various dance competitions with Coast Academy’s competition team, and in 2018 performed a lyrical solo at Star Talent in Burnaby, choreographed by Christina Fitchett, which received diamond and first place, as well as the highest lyrical score in the competition, earning her an invitation to represent Canada at World of Dance 2019 in Europe. Since then, she has been grateful for the opportunity to bring her own choreography to competitions, teaching several competition level classes over the years and coaching solos and duos.

Brontë is excited to be back for her fourth year teaching at the Coast Academy of Dance. This year, she is teaching ISTD classical ballet, modern, tap, contemporary, lyrical, and the Elite Dance program.

Alyssa began her dance training at The Coast Academy of Dance in 2004 starting with preschool ballet. Throughout the years, she then ventured into other dance styles such as Modern, Jazz, Contemporary, Hip Hop, Tap, Ballet, and Pointe. Alyssa has also been a part of the Competition team since 2014. Alyssa has successfully completed her Intermediate, Advanced 1, and Advanced 2 Modern Exams, as well as her Grade 6 Ballet Exam. In 2016 Alyssa joined the Coast Academy’s three year Pre-Professional Program and has now successfully completed her ISTD Modern Associate Exam, earning her ISTD Teaching Diploma. Alyssa had the amazing opportunity to enter a duet she choreographed into Star Talent 2018 competition where the duet placed 2nd Overall and was awarded a very high mark. This small victory with the support of her teachers and peers has pushed and inspired Alyssa and she is extremely excited to begin teaching all of her classes in the coming year.

Alyssa will be teaching Modern, Jazz, Contemporary, Kids Hip Hop and Jazz, as well as entering a few competition numbers. With a new found love of Choreographing and Teaching, Alyssa is thrilled to share her love for dance and begin her teaching journey at the Coast Academy of Dance.

With background in the RAD ballet training, culminating in the pre-professional program for the Alberta Ballet Company, and her speedy history as multinational track cycling sprint champion, that brought her not only to compete at multiple World Championships and Universiade, but also to meet her husband. Ivana Cappelletto brings to the Academy not only the love of dance, but also the passion of fitness. BCRPA-certified and leader of the multiple Award Winning Cardio Cabaret Competitive Crew, her energy and stamina inspires all the dance moms to ‘Dance like there is SOMEBODY watching!’ She shares her time with her graphic design business, daughter, son, husband, three dogs, multiple prop and costume inventions and focaccia.